Service Series is a tool to win

Service Series is an auxiliary tool in sports forecasting, but in this article I want to show how you can still make use of this service, completely eliminating any other service, and have a good profit.

If You had carefully read the manual this service, then You should know that this tool is divided into two parts: Serie "" Series (forecast is on the outcome based on patterns of chain series teams and Stats  (win, win-win, draw, total and other series of commands).

I want to show how capable of help it is the second part of the service Stats. To do this, let's select Series service mode, Stats, Statistics, and put the box Split "Separator"

Let me remind you that this option (Split) breaks all the matches on a separate command to see the ability to sort on any of the settings in this mode.

BUT! Where did you see such a low rate on Total Over 1.5?

How to find such matches? It is very simple. Chose the service Series, downloaded Football, chose we are interested in the date, after you download matches have selected the check box Stats, and when I loaded the table matches - put a check Split.

Watch all the teams that have a series of matches with Total Over 1.5 from 10 and above. These matches us and will be interested to put them on Total Over.

Let's see an example of one day's play, with whom I have done all the steps above: 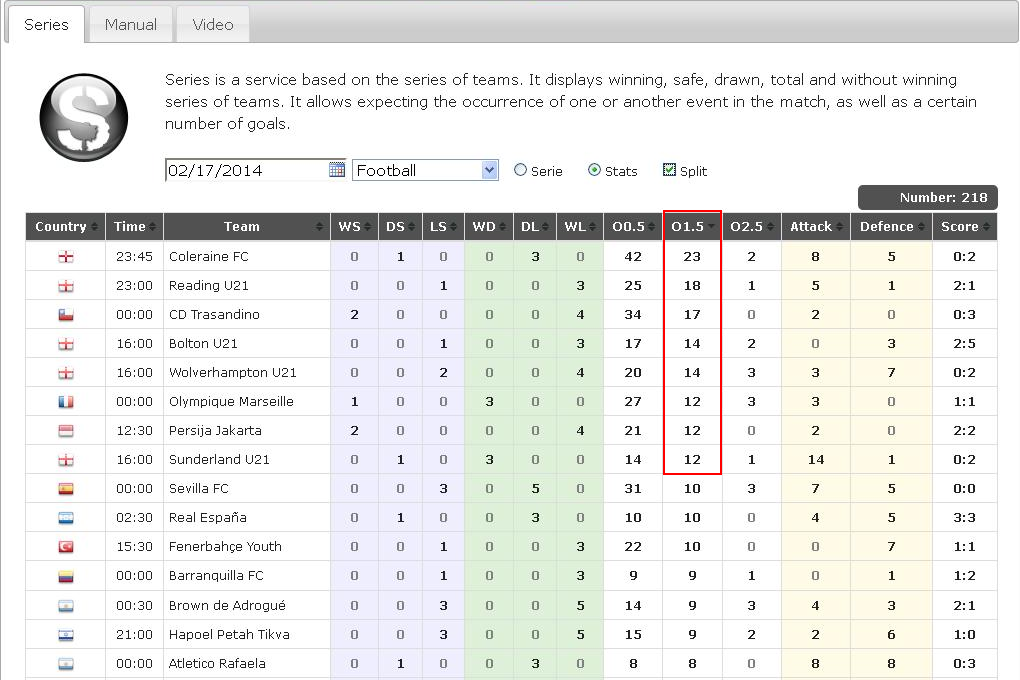 Matches that fit our conditions I have outlined in red. The result of these matches can be seen in the Score column. As you can see, in this day, all successfully passed, as all matches were scored 2 or more goals.

It is noteworthy that as a good increase in profits is a bet during the match, at the end of first half 0:0. But do we not already on Total Over 1.5, and on goal in the second half during the break. You can also add on another goal, if the first goal happened no later than 70 minutes of the match.

Other ways to augment this strategy you can think of many, all of them will take place.

I just still want to give a few criteria games goals in matches under certain series of commands that are most successful, and almost never lose.

Total Over 2.5 will be 3 or more goals in the match

If You have questions, or if You have something to add to the article, then please contact us at support@grimbets.com their wishes, share practical tips, strategies of the game. Give your own decisions about additions, modifications and corrections of our Center. And we will try to make our Analytical Center most convenient, informative and effective.